It’s Wednesday and you’re visiting your grandmother who lives alone in the north end of the city. You’re on the 4 train towards Kingsland when you feel his eyes on you. His lips purse as his eyes start at your feet and rise all the way to meet your eyes and you see that they are bloodshot and circled with red before quickly looking at your phone.

His pointed face passes next to you when the new passengers enter the train and his hand touches yours when he grabs the rail above your head and you try to push yourself away from him in the crowded train. You clutch the keys in your purse without thinking and despite the humid air of the subway, you feel his hot breath on your neck just above your scarlet winter coat.

Stop: Kingsland. Doors will open on the left side of the train.

You’re the first person out of the doors the moment they open and you hurry to lose yourself in the crowded station. Your neck crawls and you don’t need to look behind to see that his eyes have never left you.

You won’t tell your grandma about the man on the train, but his eyes are burned into your mind during lunch that afternoon.

You tell your mom what happened over the phone on your way back from her mother’s apartment and she asks if you imagined what you saw or if you were encouraging him in any way. She tells you to bring one of your friends along with you next week, but thinks it is unlikely you’ll ever see him again. Before next Wednesday, she buys you mace that comes in a plastic pink holder attached to a key chain and one of your female friends agrees to meet you at the station.

The steps into the subway are wet with the melting snow and the stale air grows warmer the closer you push to the train. Your eyes watch the shifting station as the trains push through the tunnels. Your eyes dart from face to face as you wait for your friend to show up and your stomach leaps every time you think that you think you’ve seen him again.

A buzzing in your hand tells you that your friend is ‘so sorry,’ and that she is ‘stuck at work and can’t make it.’ You head onto the train anyway because you know that your grandmother has been stuck inside with a cough all week and fortunately your pulse slows when you take your seat on the northbound train.

The doors open at each stop and you don’t notice the eyes from the other car fixed on you. They blink and turn away at the next station before entering your car and finding a seat. The eyes watch you with unblinking feral desire from under the black hair that spreads out from his face. You catch a glimpse of his gray skin out of the corner of your eye and reach into your purse to wrap your hand around the mace, but you’re met with old receipts and your subway pass instead. Cursing to yourself, you realize that you left it and the spare keys to your grandma’s apartment on the counter. Instead, you pull up your phone and are ready to call a friend at a moment’s notice.

Stop: Kingsland. Doors will open on the left.

The mechanized voice rings in your ears and you dash out of the doors again putting as much distance between you and the train as you can. Like a shadow, he stalks after you letting you run ahead and up the steps. He darts in and out of the crowd and watches your worried mind scan the faces around you in panic.

Your feet travel the well-known path towards the apartment, but you grow uneasy the further you step from the subway. You stop at the flower shop two blocks from her building to calm yourself under the gaze of the shopkeeper. While looking at the peonies, you don’t notice the steady stare from across the street that stops for a moment before turning and following your path as if he’s walked it before.

Finding a mild sense of calm and a small bouquet of early blooms, you turn out of the store and towards the approaching apartments where you hit the buzzer for your grandma to let you in. Her voice is scratchy in the speaker and lower than normal. You assume it’s the coughing, but the door unlocks and you wait for the elevator to take you to the 6th floor.

You walk to apartment 614 and open the unlocked door even though you’ve reminded her it should always be bolted. Her memory is fading, so you make a note to lock it before leaving.

The door opens into darkness and you call out for your grandma, but you are instead met with a firm had that grasps your wrist forcing you to drop the bouquet. The light from the hallway shows the red glow of a pair of eyes before the door is shut behind you and you are left to the shadows. 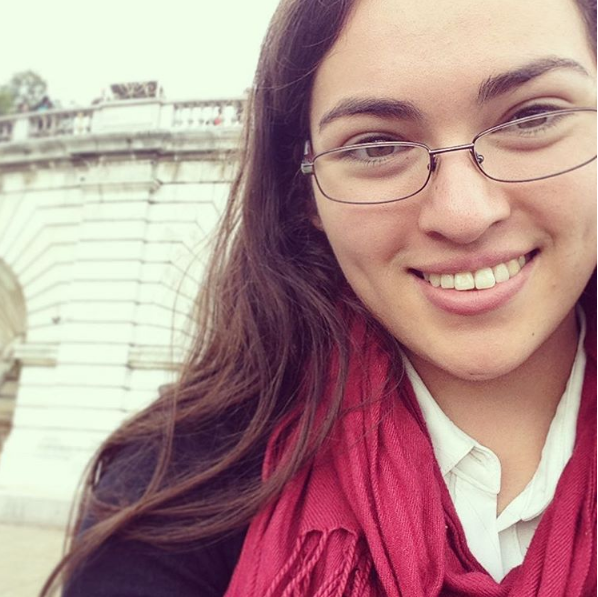 Emma Lee Kaapana is a soon to be graduate of Gordon College on Boston's North Shore. She, like the Lost Generation writers, lived in France and drank too much wine. This is her first published piece.