When I walked down the street, the protestors roared. I wasn’t sure what they were there for—I wasn’t reading their signs—but I could hear them talking and yelling. Even the ones whose mouths didn’t move were speaking. All the noises on the street; I wanted to shout but I couldn’t even breathe. I’m always hearing noises in the street, no matter where I am—even when I’m sleeping.

I’m heading to the overlord. It’s sort of a tradition of mine; I got it from my mother, to go to a church no matter where I am. I don’t know why I do this; I don’t think about it. The protestors all over the dusty road kicking and howling; you cant even hear it anymore. Can’t even describe the scene. But I was tired and caught in despair. I didn’t know why I did anything I did. At least these protestors believed in something—they must have some reason to make all this noise. Horns were blowing through the air screeching and screaming and telling me no. I don’t know how I made it to that church.

It crumbled into the road, chipped away over the years by the urban development that these modern times had brought upon us all. Modern times. What does that even mean? I mean, I ain’t never thought of myself as an old-timer, but to be a modern man just seems so plain. Standing in a line—that’s all the modern man ever does. What has all this modernity brought us anyways? Doubt. That’s it. Maybe I’m simplifying it all, but that’s what I can tell; but that church, it weren’t no modern building. It had seen the evolution of this town—this city—all the while propped up on an old and rotting foundation built upon the rock on this Godforsaken land. Dirt white and chipping from the edges, this church clung tightly to the black cross stapled to its front as if it could turn and flip at any second. One day it would, I swear, it would.

I wasn’t dressed too nice—just some dark jeans, a T-shirt, and my army green jacket. I didn’t know what this place was like. I wasn’t feeling too great. Normally I might try a little better, but these days have been hitting me hard. People were dressed nice—kids, mothers, grandmothers, and maybe a father here and there—everyone in their finest clothes. I felt out of place. These people stood outside the church, talking to each other, waiting for the service to begin. The Southern sun beating on us all—the protestors, the churchgoers—the unforgiving yet all giving God hanging visibly in the sky. I can see Him; his light brightens us all. Does the dart on the top of this church aim for Him? It certainly misses. All these people missed me; I walked in the church without a shrug or a glance—I was completely and utterly alone.

All of these people—the years have engraved their pain and their terrors into their faces. They wore their stories on their skin, prodded and tattooed by the sun. This church—I mean—this church; all there was was an open room with benches facing the altar of Jesus’s sacrifice. The walls a dark stain of splitting wood. People were sitting and people were standing. All waiting and talking and laughing. I took a seat towards the back, far from the drama that would occur at the front.

More and more of those who were standing outside began to make their way in. The heat of the sun was carried in on their backs. As I waited a choir had manifested itself in the front without my noticing. Above them in black read “HE IS RISEN.” A man wearing black, heavy gowns made his way to the front, clutching a book in his left hand. As soon as he arrived at the altar, the entire church fell silent. There was a silence that lasted for nearly a minute—the type of silence that cannot be described. He looked down, and then looked out. His eyes yellow and cold and stern; his mouth sealed shut, until he shouted:

“Praise the Lord, Everybody!”

A few breaks from the silence followed in the form of a scattered “Yes!” throughout the crowd.

“Praise the Lord, EVERYBODY!”

This was followed by more of the same breaks in the silence.

He began to pretend that he was slipping or tripping; like he was about to fall right into the front row. A couple shouts came from the crowd.
“Have you ever felt,” he said, “as if you were tripping, and stumbling, and fumbling, up on this journey to the top of the mountain?” He waited for a response. “This mountain.” He paused again. “This mountain of ours is our own to climb to. This mountain is our path, devised and prescribed by our Lord above, do you know what this mountain is that I am talking about?”​

“Well then answer, have you ever felt as if you were tripping, and stumbling, and fumbling, on this journey to the top of the mountain?”
“Yes!” shouted the crowd, once again.

He began to whisper, “doubt.” He held a long pause before yelling, “well what is doubt? Doubt, is the root your tripping over; it’s the mud you’re slipping on, on your journey to the top of the mountain; a mountain, built by the hands of the very Lord Himself. Doubt, leads you to the way of the false summit!”

“A false summit. Those who doubt might belieeeeve that they have found the top of the mountain! They might believe, that they, are standing on the higher peak! Well, we might let them believe so, but we know, WE KNOW, where the true summit is!” Shouts and cries came from the crowd and the choir for an extended period. ​

“Those who doubt might believe they are looking down on us. Well, my sweet Virginia, will you come down here with me?”​

Voices erupted with the a resounding “Yes!” that left the broken walls of this church reverberating with praise.​

He yelled over them all, “In times like these, we must remember what we must be thankful for!” ​

The reverberations continued to rain from the ceiling of this beat up church. What could I be thankful for? Thank you, Spain for your lovely wine. And thank you, to my mom, for your sweet and bitter love. What did anyone else feel thankful for? I didn’t care and I probably never would. I was feeling like I didn’t care about anything or anyone. If I couldn’t be moved by this, was there any hope for me? I was stuck there thinking, in the middle of a shouting crowd, does this man practice what he preaches? I mean, does this guy never doubt? I mean, does this guy really believe all of this? I mean all of it. Jesus, and God, and the Holy Spirit—does he really believe this? Maybe I shouldn’t sit here thinking how foolish this man really is, he’s thinking the very same thing about me. He kept talking and I hated it. I hated it.

​​Right then the choir and the crowd broke into praise. Singing and shouting on a jive flowing and moving through their veins, into their blood. It moved them all. They moved and moved and moved. Shouting and shouting. I couldn’t make out anything. The reverberations were in my skull, shaking around, penetrating my brain. A dim tone came over me until I lost my hearing. I could hear nothing.

I sat down and found a girl, ten or eleven, on the bench in front of me, staring me in the eyes. Her skin had no story to tell; the sun had not yet burned her narrative into her face. Her story was in her eyes. Brown eyes. Staring. Staring. She wore no smile. She wore no emotion. Staring.

Maybe she was an angel. She wasn’t. She told me to relax my mind. She didn’t tell me anything. Her mouth wasn’t moving, but she was talking to me, and I could hear her better than I had ever heard anything in my life.

The noises came back and I could hear the singing and shouting of the belief in something so unshakeable. My eyes were red and my face was covered in tears. I smiled. I could taste the tears fall into my mouth and glide across my wide smile. I walked out of the church into the bright Sun. Could I worship the sun? ​

I walked down Main Street exiled between the shouting crowds of those who hold onto something. The protestors were louder than before—the churchgoers were singing with the passion of their God. I could feel the electricity in the air, moving for thousands of miles, undisturbed, only to be frightened and stopped by my skin. Warmth on the surface—light that is sacred; this is what I thought. I walked away knowing I would not let the Sun pass me by without me knowing, and praising, ever again. 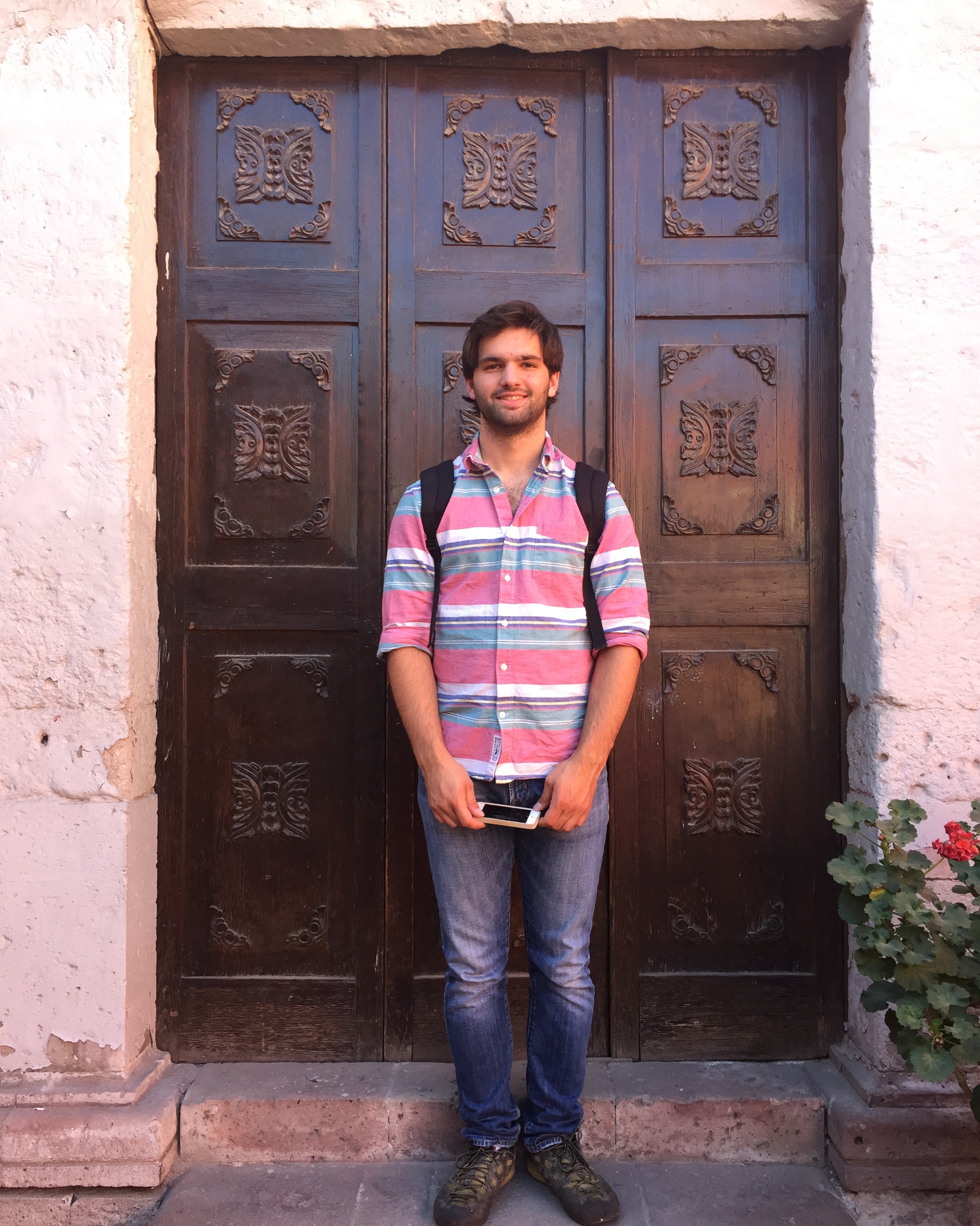 Edward Pomykaj is a writer and Senior English student from Schenectady, NY. As a writer, Edward is greatly influenced by music and art, often weaving in various references to philosophical questions through the lens of simple narratives that investigate various forms of faith. A lifelong guitar player, Edward is looking forward to creating music as well as other short stories and will be traveling in the year following his graduation.